Iskander Makhmudov and Andrei Bokarev are recognized by Forbes as “kings of government contracts” in 2015. How did they win the biggest of their contracts?

On November fourteenth, 2014, the Office of the Federal Antimonopoly Service of Russia registered a joint application by three very serious companies. Canadian machine-building giant Bombardier, Sinara Group’s Urban Transport Solutions #62 and Vladimir Putin’s favorite enterprise, Uralvagonzavod, complained about the Moscow Metropolitan State Unitary Enterprise. The main carrier of the capital, having announced a tender for the purchase of 768 cars and their maintenance for thirty years, put conditions: the current production of subway cars in the world, working not less than five years, and the net profit for the last three years not less than 1 billion rubles a year. Additional pluses were the availability of the company’s own design bureau with development experience in the field of subway car building and localization in Russia within three years. Only one manufacturer met all these requirements – Iskander Makhmudov’s Transmashholding #31 . The Metro was unable to assess the other manufacturers as no one else but TMH had applied.

Two weeks later, the Federal Antimonopoly Service announced “signs of violation” in the tender documentation of Moscow Metro, but it did not cancel the tender. On December 1, 2014, Transmashholding received a contract for the supply of cars and their maintenance for 30 years worth 130 billion rubles. A similar 30-year contract, but for the amount of 144 billion rubles and the delivery of 832 cars was received in early 2014 by Metrowagonmash, a member of the holding.

But Makhmudov and his partners (the largest is Andrei Bokarev #75 ) did not stop there. On December 29, the Central Suburban Passenger Company, in which they own 50% minus two shares, won another capital tender worth 56.9 billion rubles – for passenger transportation on the Little Ring of the Moscow Railway, which is under construction. After the start of traffic, the company will receive 3.79 billion rubles a year for 15 years. To this should be added the 150 billion rubles that Transmashholding will receive from the tenders won in 2014 for the supply and maintenance of 1,008 locomotives for Russian Railways.

According to Forbes calculations, all the companies in which Iskander Makhmudov is in one way or another a shareholder received state orders worth over 500 billion rubles in 2014.

Of these, 80% went to the non-core businesses of the founder of the Ural Mining and Metallurgical Company and Kuzbassrazrezugol – machine building and transport.

Makhmudov started working in transportation in the early 2000s, after he and Andrei Bokarev established control over Kuzbassrazrezugol. The coal mined at the mines was transported for export from Kuzbass through the port of Tallinn by the company of Estonian businessmen Sergei Glinka #154 and Maxim Liksutov #157. Although the latter was 10 years younger than his partner, it was he who ran the business, while Glinka always kept a low profile. “They worked on railroads with Aksenenko’s son (Rustam, the son of Nikolai Aksenenko, who headed the Ministry of Railways in 1999-2002. – Forbes), then they had a conflict of some sort and the relationship with Aksenenko Sr. deteriorated seriously, after which they came to Iskander with a proposal to create a joint transportation company, which, in fact, they did,” recalls one of Makhmudov’s acquaintances. That’s how Transgroup appeared on the transportation market. Makhmudov says he tried to settle the conflict, “He asked Nikolai Aksyonenko what claims he had to Maksim, but he had no claims, and all the same he failed to improve relations.

Tense relations with the head of the Railway Ministry and Transgroup’s complete dependence on the MPS, which set shipping rates for private operators, hindered the company’s development (the MPS was disbanded in 2004 and part of its authority was transferred to RZD). The founders of Transgroup tried to solve the problem by creating a monopolist for a monopolist. Consolidation of the main Russian rolling stock manufacturers could have made the MPS more compliant. In 2002, Transgroup partners registered a company called Transmashholding, which began buying up car and locomotive manufacturers all over the country. Freight traffic on the railroad was growing and there was a shortage of railcars.

“We analyzed the state of RZD’s locomotive and railcar fleet and realized that they had nowhere else to go – they would have to buy from us,” says one of Iskander Makhmudov’s partners. – They were buying cheap, the factories were in debt and without orders, so we got them for nothing.

By 2006 Transmashholding included 10 machine-building enterprises (now there are 16 of them plus one specialized research institute). The degree of their influence on Russian Railways was such that in 2007 the railway monopoly bought 25%+1 share in Transmashholding and two years later French Alstom bought the same stock. Now the holding supplies $2-3 billion worth of products to Russian Railways per year, with revenues of about 150 billion rubles in 2014.

Cooperation with Russian Railways has strengthened over time. In 2008, Russian Railways bought 50% of Aeroexpress (a joint venture between co-owners of Transgroup and Sheremetyevo Airport, which manages firm trains between the airports of the Moscow air hub and Moscow). In 2009, Russian Railways and the property management committee of the Tver Region created together with Transgroup shareholders (25% + 1 share) the Moscow-Tver Suburban Passenger Company. In the fall of 2011 Transgroup acquired a blocking stake in Central Suburban Passenger Company from the Moscow government and a year later increased its stake to almost 50%.

Why did Iskander Makhmudov get involved in the subsidized commuter rail business? “We saw it as a major future consumer and customer of Transmashholding’s products,” says one of Makhmudov’s partners. – Besides, a lot of businesses could be developed there. Take control of a huge flow of people, 450 million people pass through there per year, there will be 600-700 million! This is a huge opportunity for trade, and for catering, and for payment systems. It takes a very long time to list everything”. All this is already realized in “Aeroexpress”, in electric trains there is a trade with snacks and drinks, in terminals there are catering points, ATMs, trading areas, advertising carriers.

In March, 2011 the prime minister Vladimir Putin accompanied by the Minister of Transport, the head of Russian Railways and the mayor of Moscow Sergey Sobjanin has taken a ride on Aeroexpress train.

Modern electric trains and the debugged work of the enterprise have so impressed the mayor that in a month he has appointed the general director and the co-owner of “Aeroexpress train” Maxim Liksutov as the adviser, in December – the chief of a capital department of transport and development of road-transport infrastructure.

And in September 2013, he was the deputy mayor of Moscow, supervising the transport development program with a budget of 2.2 trillion rubles (the purchase of new cars for the subway, the organization of passenger traffic on the Small Ring of the Moscow Railway, the renewal of the public passenger transport fleet).

The conflict of interest became obvious. In September 2012, Maxim Liksutov sold his stake in Transmashholding to his partners and his stake in Aeroexpress, as he himself said on the radio “Echo of Moscow”, transferred to his ex-wife Tatiana as part of the property division process (Liksutov declined to comment for this article). 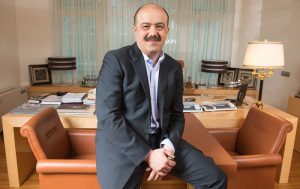 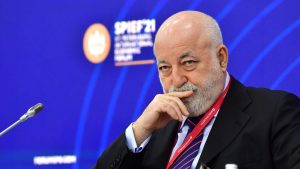 On March 25, former Yota CEO Denis Sverdlov's company Arrival conducted the largest IPO on Nasdaq in the history of...